What makes a group of talented people a trusting, high-performing team? What norms would allow team members to manage themselves and build strong relationships with each other? Is self-management even possible? These are the questions Vanessa Urch Druskat, Ph.D., has been finding answers to in her thirty years of research.

Last December, the author of Linking Emotional Intelligence and Performance at Work and an Associate Professor of Organizational Behavior at the University of New Hampshire attended the Global Teal Meetup to talk about the influence of emotional intelligence and external leadership on self-managed teams and how developing a sense of belonging impacts collaboration and team performance.

As a doctoral student at Boston University, Vanessa was fascinated with the concept of people managing themselves. This idea of a team held together by freedom, ownership over their work, and trust contrasted with her experience studying teams from different manufacturing plants where people had to ask permission to use the restroom and had carefully scripted breaks. This interest led Vanessa to study Polaroid’s self-managing teams initiative and then she selected a group from approximately 300 self-managing teams at a polyester manufacturing plant in North Carolina. In that last experience, she identified ten teams that were outperforming every other team. They were performing so well that they were making $9 million more per year than the average self-managing teams in that organization. What made them more successful than the others? This was Vanessa’s observation:

I studied the heck out of these ten super teams, and I studied the sample of another ten average-performing teams. It was just fascinating. The critical finding that I had was that the [outstanding] teams developed a strong culture, they had really strong norms, and the norms enabled them to manage themselves. And central to their norms was this idea of getting to know one another, spending time learning about not just one another’s needs but skills and interests. [And as part of their culture, they had this growth mindset] where they were constantly learning from each other, they wanted to be independent, they wanted to be self-managing, and they wanted to succeed. But they were also really good with their stakeholders, including those that mattered most, which was what I ended up calling their ‘external leaders,’ the people who were right above them in the hierarchy. So I quickly discovered that there is no such thing as a self-managing team in this context anyway. You’re always reporting to someone. But if they weren’t able to manage that relationship well, then they weren’t able to maintain their freedom in this situation because the leaders above them had this dilemma of not understanding their role.

Is self-management possible then?

Can a team manage itself? Who manages that self-managed team? These questions inspired another set of research questions and led Vanessa to tweak her team collaboration and performance model over the years.

The idea of self-management can inspire some people, but it can also be scary to those in positions of power, especially to leaders who are insecure or are not ready to let go of control over their teams. Leaders from typical organizations, those built from rigid structures, tend to oppose this concept even though self-management practices can increase the effectiveness and wellbeing of the whole team. While researching the impact of leadership on self-managing teams, Vanessa discovered that they benefit from having a strong figure who can manage their context and hold back forces that try to take control away from them. But to minimize resistance when applying her model in different kinds of organizations, she shifted the focus of her model from self-management to building a collaborative team culture. After her presentation, she explored this topic in more detail in a conversation with Travis Marsh and the Global Teal Meetup attendees.

Regardless of the terminology, Vanessa is certain that her model can help teams empower themselves, work well, and create a culture that includes people:

Recently, I’ve spent a lot of time thinking about why this [Team Emotional Intelligence Model] works so well, and I’ve concluded that it’s because (…) it creates a culture of belonging. So, as I dug into the belonging literature, I learned that it requires a couple of different things that end up getting taken care of in this model.

To feel that sense of belonging that frees you up in a team, the first thing you have to have is self-worth. You should feel understood, heard, and know that people care about you and value what you bring to the table. That’s fundamental. But you can’t maintain that unless you have a voice in how the team operates. The second piece that you have to have is a voice in what the team culture is about, what the team’s currently doing, how you can get better. You need to constantly check in with how you are doing now, how you need to change, how do you improve. Everyone’s voice has to be heard. And third, not only is everyone’s voice heard, but everyone feels that they have a sense of control in that team. So those are the three buckets that I found to enable a person to feel like they belong, and I think that that’s what drives this model. 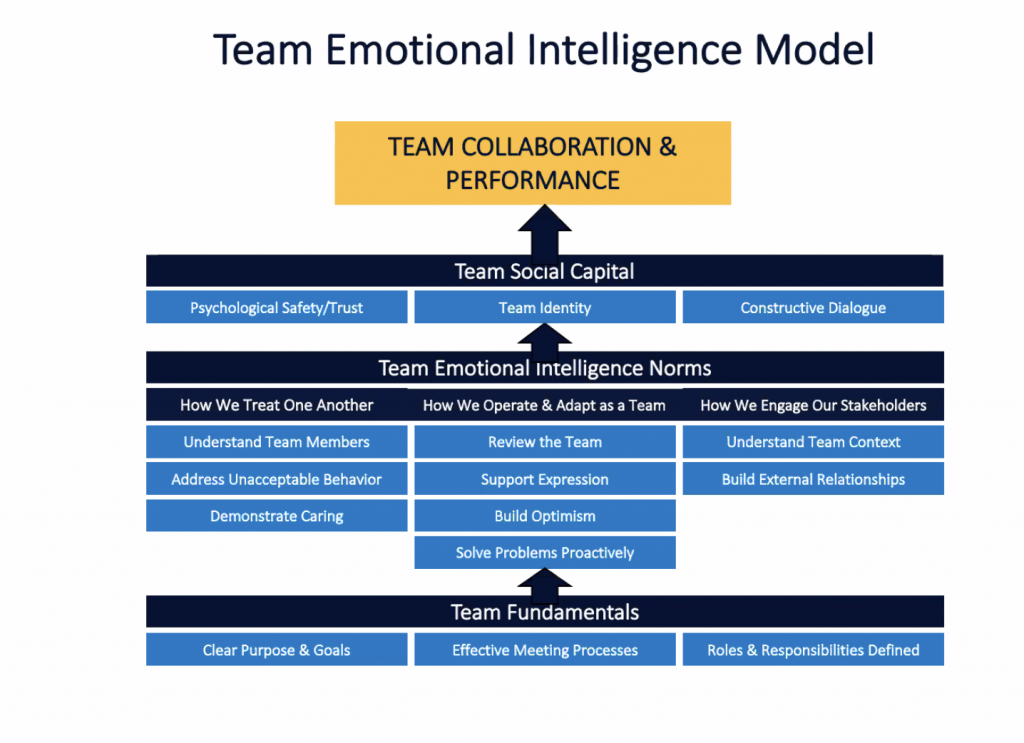 After telling us about what motivated her to study team dynamics and the vast range of experiences she had, Vanessa dove deeper into her Team Emotional Intelligence Model and what could transform a group of technical people into a trusting, highly engaged, and effective team. Here’s how she explained it:

This model started in that manufacturing plant in the southeastern US. The bottom part, what we call Team Fundamentals, was something that I built after taking this research to many, many different organizations. I discovered that in order to be an even average-performing team, you had to have a clear, engaging purpose and goals. You also had to have someone who knew how to facilitate meetings, someone who made sure there was an even flow of information and didn’t let people dominate. And finally, people had to know what their roles and responsibilities were. They had to be very clear. So these were fundamental, but alone, they wouldn’t kick you into this high level of performance. And what we found were these social norms. These norms, this culture had several buckets. And we call these Team Emotional Intelligent Norms because they built this socially and emotionally comfortable environment.

The next set of norms falls into three buckets. Level one is How We Treat One Another. The second is How We Operate and Adapt as a Team, which is how we continually improve. And third is How We Engage Our Stakeholders. So these are empirical and came out of that initial research. I had these three buckets, and then the norms underneath them were tweaked slightly over the years.

The first one [in this bucket] is understanding the people because you can’t feel like you belong if you don’t feel known and understood. For me, this is one of the most critical norms in the model. People have to know who you are, what you want, and what you care about. They can’t trust you unless they know you. That’s fundamental to building safety and trust. Then we have to be able to address what I’ve started calling ‘unhelpful’ behavior—nobody likes the word “unacceptable” in many places in the world, as you can probably relate. And something I found in self-managing teams is that they often give each other feedback in pretty caustic ways, but it was better that way than just giving someone the cold shoulder. In the lousy teams, if someone did something that you felt was unhelpful, like showing up late, not doing what they said they were going to do, cutting people off, or being dominant—whatever that might harm the team—, people just give them the cold shoulder or ostracize them as a way of trying to control them. And it didn’t work. It just created negativity in the team. So this would be the ability to give feedback in a way that’s acceptable to the team. And finally, respect. We listen, we care about one another, and that builds belonging.

In the second bucket, we step back periodically in a systematic way to review how we’re doing, our norms, and our culture. That is what great self-managing teams constantly did. You have to check-in. They didn’t have a leader to necessarily do this for them, to tell them what to do, so they had to say, well, how are we doing? And they did that periodically, and it would work well. Supportive expression is something that we added after that initial study because we discovered that in great teams, they make it easier to speak your truth when you’re reviewing the team. So they have a way of lowering the hurdle to make it easier for people to take the risk. When you’re reviewing the team and people are speaking their truth, they can sometimes feel negative. So what I found was that self-managing teams had a way to come around, to be optimistic and say, “we’re great, and this is how we’re going to do in the future. This is how we’re going to create momentum.” And lastly was this fourth norm that fell statistically into the third bucket, but theoretically fell into this [second] bucket, which was being proactive, being strategic, if you will. So thinking in advance about what could go wrong gives [team members] a sense of control. That often requires going out and getting information from stakeholders.

So these stakeholders that were in the self-managing teams were customers, but more important to their ability to maintain their self-managing status was managing the people above them in the hierarchy and teams at the same level of the hierarchy. People were handing things off to them, and I had story after story of how they would go out of their way to understand what was going on up the hierarchy and around them and how they built relationships so that when they needed someone, they were there. Being able to manage their teams mattered to them.

And finally, we call all of this the Team Social Capital, which is essentially psychological safety and trust, team identity, and constructive dialogue. That led teams to this high performance.

To discover how Vanessa’s work links to the core principles of Teal, Holacracy, and other dynamic organizational structures, we invite you to watch December’s Global Teal Meetup on the Human First Works YouTube channel. If you prefer, you can also read our transcript of Vanessa’s presentation and conversation with Travis.

Give an Email,
Get Our Newsletter